Text requested for the AIU – Arab International University, Damascus (Syria), to be published on the occasion of Alberto T. Estévez’s lecture in 2008.

In a far far land, a little architect that was still 22 became in 1983 the youngest architect of his country. At that time, he began his first house, already with an environmental and sustainability approach, when the word “ecology” wasn’t yet in the newspapers. With alternative energy considerations, this would be the first passive solar building of his young generation (House Gonzalo, Sigüenza, 1983-1985). Those were times when he had different personal conversations with visionary architects of the Austro-Hungarian court, like Hans Hollein (about whom he developed his first doctoral thesis), Rob Krier or Gustav Peichl, and those naturally were influences for his early works.

But quickly he discovered the work that at the same moment were making artists like Donald Judd or Sol Lewitt. So, again in contrast to the realism of the local establishment, his fascination for taking pure geometry, neutral abstraction and homogeneous rhythms in architecture made him built also the first so called minimalist building of the same mentioned new generation, that at that time still wasn’t 30 years old (School, Montgat, 1986-1987).

And when this reductionist tendency in architecture began his general diffusion —always without leave his interest in constructivity and functionality— he needed to introduce some dynamic, expressiveness and colour that was against to the Sachlichkeit, to the objectivity and materiality, to the plain rational-functionalism that dominated his city, specially in the 80’s, because the strength of the immanentist Barcelona’s School. In this line of expressiveness he arrived to build a house that at the same time was also the first building of his mentioned generation that introduced roofs as vegetal green platforms: roofs with alive plants besides other solar passive conditions (House Gómez, Almerimar, 1993-1995). Finally, his works with green roofs took him to create the Green Barcelona Project (1995-1998) that was introduced to the Major of Barcelona. 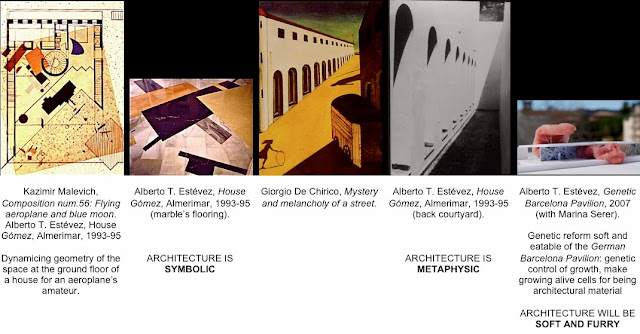 But at the beginning of the 90’s he began to be aware of some surreal, perhaps in a logical consequence of some symbolic that he also included in all his life: discovering that this subjectivity and metaphysic introduced richness in architecture. This was not far of his fascination with Antoni Gaudí’s works -the biggest visionary architect of the whole history- that enabled him to write some books and articles about him. With independence of that in his years at the school of architecture (in Barcelona!, not in Sidney...) he never heard a reference to him. All his life with his window pointed towards the Sagrada Familia, seeing day after day his rising to the sky, towers like an epiphany of architecture, and being inside every Sunday from his birth, and playing like a child in the Park Güell, and seeing in Barcelona streets other works of Antoni Gaudí as House Batlló, House Milà, House Figueras, etc. Also, further, the words that the first defender and hero of organicism Bruno Zevi write him personally was perhaps a strong background for expressiveness, dynamic and symbolic for his work: “We wish and we wish you to exclude symmetry, that was good for Franco. Viva Antoni (Gaudí)!”


Also there was some important considerations for this kind of organicism, the understanding that surrealism is a way for the redemption of Santiago Calatrava’s work (about one who he published another book, and he did his second doctoral thesis, this time in History of Art), that he met also personally trough different times and conversations. In this sense, the city where Santiago Calatrava have built his first bridge and his first tower, is the same city of Antoni Gaudí, the city where Salvador Dalí discovered that “the future of architecture will be soft and hairy or won’t be”. And in this same city Alberto T. Estevez founded the ESARQ (UIC) in 1996, which Francisco Javier Barba Corsini qualified encouragingly as an "emotional school", a new generational school, in reaction to the sachlich rational-functionalism of the so called Barcelona School. Thus it might not be a coincidence that in the same city was started in 2000 the effective implementation of genetics in architecture, with the creation of the first genetic architecture laboratory in the world, with the creation of the first digital fabrication laboratory in a Spanish school, with the creation of the first postgraduate programme about these subjects, the Genetic Architectures and Biodigital Architecture Master and Ph.D.

The big fascination comes from understanding the strong potentiality of natural world if you work with DNA like a “natural software”, and the great possibilities of digital world if you work with software like a “digital DNA”. All this took him to research architectural objectives for genetics. For example, his Genetic Barcelona Project (1st phase, 2003-06 / 2nd phase, 2007-10 / 3rd phase, 2011-14), that has begun the genetic creation of bioluminescent plants for urban and domestic use: the first time in history that geneticists work for architects. Or also for example about the genetic control of growth, make growing alive cells for being architectural material, illustrated by the Genetic Barcelona Pavilion (Ceci n’est pas un pavillon: a genetic reform soft and eatable of Mies van der Rohe’s German Barcelona pavilion, Barcelona, 2007). And also he worked from 2000 on in the research of using the new digital CAD-CAM technologies for producing real 1:1 scale architecture. This has special research possibilities collaborating with the architects that participate in the mentioned Master and Ph.D. (Mark Burry, Bernard Cache, Karl S. Chu, Dennis Dollens, Evan Douglis, Mark Goulthorpe, Michael Hensel, Neil Leach, Kas Oosterhuis, François Roche, Lars Spuybroek, Mike Weinstock, etc.). Research reflected also in his own work (for example, Consulting rooms G., Barcelona, 2008; Biodigital Barcelona Pavilion, Barcelona, 2008-09; Skyscraper at the seafront, Barcelona, 2008-09; Sporopollenin House, Barcelona, 2009; etc.). Everything culminates with the definitions that he has written and published in books and articles, about digital organicism as the first architectural vanguard of the 21st century.
Publicado por Alberto T. Estevez en 7:27