It is no coincidence that Barcelona —Gaudí’s city, where Dalí prophesied that “the future of architecture will be soft and furry”— should have seen, from 2000, the real application of genetics to architecture, with the world’s first (real) genetic architecture laboratory and the first digital production workshop at a Spanish school of architecture. Done with the creation of the first officially recognized research group (“Genetic Architectures”, now financed also by “La Caixa” and by INCASOL of the Generalitat of Catalunya) and the first systematic official post-graduate programme on these subjects, the Biodigital Architecture Master’s Degree and Ph.D. Programme, at ESARQ (Universitat Internacional de Catalunya).

Thanks to new bio & digital techniques, humans can transcend a historical barrier, from only millenary action over the order of the “surface”, to a new action over the molecular order. Now humans can work on an intra-molecular level, towards the knowledge of the genetic orders of order, when the general visible order of bio & digital beings is controlled by bio & digital information’s chains (Estévez, 2009b). Working on this level, one of the main advantages is that the control of this information’s chains allows the structure, form and skin “emergence”, with biological or digital processes, to become architecture. Done with materials that emerge, that “grow” alone thanks to self-organization systems, biological or digital, towards more precision, more efficiency, more sustainability. Also with the possibility of fusion & link of the mentioned information’s chains in a biodigital architecture. Is a vast potential in a biological world if we work with DNA as if it was biological software, and in a digital realm if we work with software as if it was digital DNA: This is the most peculiar application of genetics in architecture. Understanding that DNA and software are the same, information’s chains, natural or artificial, that produces orders (order) for self-organization, for autonomous growth, for emergence processes, for structure, form and skin emergence.

So, exists two types of research objectives for biodigital architecture, that the Genetic Architectures Research Group do, also teach at the mentioned Biodigital Architecture Master Programme:

1. Working with “natural software” (DNA), with live elements, with application of real genetic processes to architecture, for “automation” natural growth: Genetic research to obtain living elements, building materials and useful living spaces for architecture. Architectural objectives with the application of genetics, illustrated with the Biowall, the Biolamp, the Sporopollenin house 2, the Barcelona Genetic Pavilion (Estévez, 2009a), the Genetic Barcelona Project, now in the second phase of the genetic creation of bioluminescent plants for urban and domestic use: The first time that geneticists are working for architects. Research is being carried out into the genetic control of growth to develop living cells that are converted into building materials and habitable space that are “directed” by means of their specific genetic design, thereby producing architecture that is 100% ecological, recyclable and sustainable, with maximum energy-saving throughout the construction process and no need for manual labour, as its growth is natural.

2. Working with “artificial DNA” (software), with computing elements, with application of real cybernetic processes to architecture, for automation of the robotized production of architecture digitally designed: Digital design and production seen as a genetic process. Knowing that “what can be drawn can be built”, because what can be drawn using digital tools has a digital DNA, that allows automated emergence, robotized self-construction and artificial growth. Using digital technologies for not producing more models or moulds as is habitual in today’s production systems [“No models, no moulds!”], but to produce real architecture at the natural scale of 1:1, illustrated with the Barcelona Digital Pavilion (Estévez, 2009a), the Barcelona Consulting rooms, the Biodigital Skyscraper, the Barcelona Biodigital Pavilion. This is a move beyond the mass production of uniform elements, since digital design and production can equally produce 100 identical or 100 different parts.

First human’s needs are about food and health. These are already covered by genetics. To have a roof, heat and light are the other three primary human’s needs. These, that are related with architecture, are researched by us. Taking advantage of natural characteristics of animals and plants, making possible his use for improve our world’s sustainability, designing DNA for letting grow human habitats, heating-plants and bio-light, our three general research objectives.

The Genetic Barcelona Project is a research about the genetic creation of bioluminescent plants for urban and domestic use (Estévez, 2009a). In a first phase (Figure 1) the focus was about possibilities of GFP (Green Fluorescent Protein). In a second phase (Figure 2) the research has open other ways of bioluminescence. In this line was created the Biolamp, a kind of bioluminescent batteries, with infinite number of applications, in walls, panels, ceilings, doors, skirting boards, decoration in general, fashion, exhibitions, parties, etc., always without cables, without installations, without electricity. 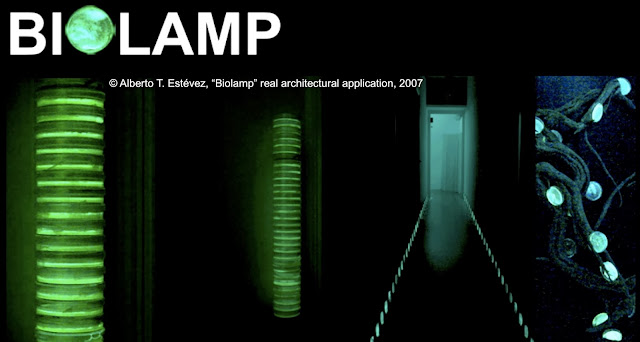 “The amazing plasticity of the figuration that we call ‘nature’ is also moulded through the random interaction of certain viruses that can mutate the DNA of other beings. Million years after, ‘the will of mutation’ of nature has made ‘the perfect mutator virus’, the human being (see this statement as a slap to the anthropocentric arrogance). Let this be, moreover, as basis or justification, in some way, in a not conservational viewpoint of ‘nature’: Itself, and humans in first instance, need to overcome such a vision to survive. In fact, plasticity is the main characteristic of nature, to the extent that it would be an act ‘against nature’ wanting to ‘lock in’ the life in each of their everchanging appearances. The most peculiar of ‘nature’ is not to be an exotic collection of diverse species, but is the fluidity presented under different aspects that perform it. And so on, the human being is the most powerful vector it has produced. Make it flow!” 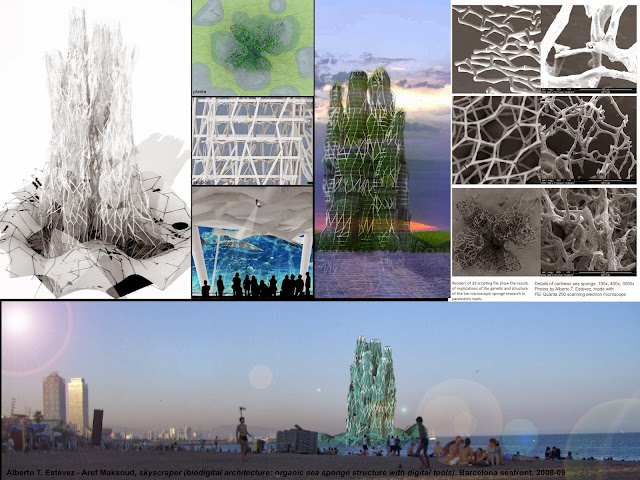 The Biodigital Skyscraper (Figure 3) is a research about sea sponges and experimental bioparametrical studies, for extracting the genetic rules and the structural parameters for application with digital tools, that let the architectural design “emerge” alone, in the way that can also be produced and fabricated digitally, because of the designed digital DNA: “What can be drawn can be built”. In the understanding that also a genetic research protocol can arrive to obtain its biological DNA. The definitive way is the fusion of the two possibilities, in the constant election of the most efficient process for its application in every building’s part. And after a “biolearning” process, comes to the use of CAD-CAM technologies, for producing directly real 1:1 scale architecture, from genetic architectures points of views.

The Consulting rooms (Figure 4) begin also with a microscopic research, in this case about radiolarian and pollen structures, like natural systems that have been perfected during million’s years of evolution, until their high relation of efficiency/economy: heir application will take also these advantages. In this way starts the studies, as mentioned for the Biodigital Skyscraper, for extracting the genetic rules and the structural parameters for application with digital tools. Having its digital DNA that let also the architectural design “emerge” alone, we have produced it and fabricated digitally, with the effort to fulfil with the manifesto “No models, no moulds!”: Only directly digital produced elements in real scale 1:1 are “allowed” (Figure 5). 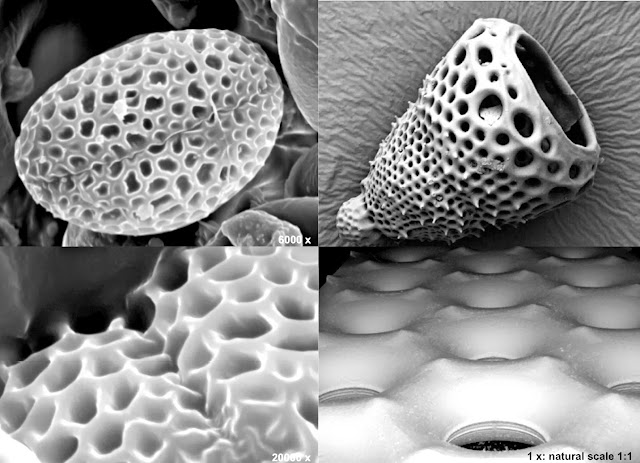 The Barcelona Biodigital Pavilion (Figure 6) is one step more in the digitally fabricated application of the microscopic research about radiolarian and pollen structures, in the way to obtain domes and roofs, not only panels: Nature teach us that at certain level animals (radiolarian) and vegetables (pollen) structures are built equal. We need only to “biolearn” from it, from the advantage of solutions that have the success of being tested for emergence of life along millions of years. So, only remain to extract this life information for produce architecture of similar conditions with digital tools. Something that allows a similar emergence: The second key of efficiency, of economy, of performance.

Of course, to start a genetic research protocol, it is necessary to understand that structures need to follow the fractal jump from one scale level to the other: for example seeing how sponges are formed by “little sponges” that are organized by other more little sponges that is how the masses of cells grow (Figure 3 right). We know that ants or humans can’t grow for example until 15 meters high without the collapse of their own structure. But ants or humans can be added in his original natural scale for have something of 15 meters high, as also the typical Catalan tradition of human towers shows. Here is one of the most relevant life information for application in architecture: The exigency of fractality needs to be respected in biological structures and in digital structures.

In front of our inhuman reality, the manifesto-image “The perfect house” (Estévez, 2007) remember us that “a house is not a box…” After thousands of nature’s teaching years from which we need to learn (“biolearning”), why still today houses are boxes? Why a house must be a box? Nobody can obligate us more to live in boxes… Cloning software that architects can use: Design of genetic buildings with the same chains of information, the same ones and zeros that nature use (Estévez, 2003).

Genetic architectures… Biodigital architecture, fusion of genetics and cybernetic, allowed by new bio and digital techniques, when biological DNA and digital software are new materials that allow new systems for a new architecture, with the digital organicism, like the first avant-garde movement of the XXI Century, his first consolidated tendency (Estévez, 2005). The utopia of today is the reality of tomorrow, and, today is tomorrow! Certainly, science has exceeded fiction (Estévez, 2009b).

Estévez, A. T. (2007). “Genetic architectures: ‘the perfect house’ or a house is not a box...” In Arte, Arquitectura y Sociedad Digital, A. T. Estévez et al., 1 and 117-122. Barcelona: Publicacions i Edicions Universitat de Barcelona. (www.artyarqdigital.com)