The latest biological and digital technologies offer new possibilities and benefits for the production of new architecture: There is vast potential in the natural world if we work with DNA as though it were “natural software”, and in the digital realm if we work with software as though it were “digital DNA”. Pioneers in these fields converge in the Biodigital Architecture Master’s Degree, with the Genetic Architectures Research Group and Ph.D. Programme at the ESARQ (UIC), in Barcelona. The purpose of this article is to put forward the theoretical basis and some of the research carried out to date.

It is perhaps no coincidence that Barcelona —the city of Antoni Gaudí, also where Salvador Dalí prophesied that genetics will change the future of architecture— should have seen, from 2000, the real application of genetics to architecture; with the creation of the world’s first genetic architecture laboratory and the first digital production workshop at a Spanish school of architecture; with the creation of the first research group and the first systematic post-graduate programme on these subjects, the Biodigital Architecture Master’s Degree and the Genetic Architectures Research group & Ph.D. Programme.

Work has begun on using genetics to meet architectural objectives and on research into the use of new digital technologies to produce architecture at the real scale. We can now see the advantages of this genetic, biodigital architecture made of materials that emerge, that “grow” of their own accord, thanks to systems of natural or digital self-organization, when DNA and software are the new materials of a new architecture, and when genetic and cybernetic systems are the new systems of a new architecture. It is fascinating to see the great potential of the natural world if we work with DNA as though it were “natural software”, and the vast possibilities of the digital world if we work with software as though it were “digital DNA” (Estévez, 2003). Our field of interest is biodigital architecture as the fusion of genetics and cybernetics, at a time when new biological and digital technologies have given us the conditions for a new architecture. In this sense, the following diagram is based on the above: 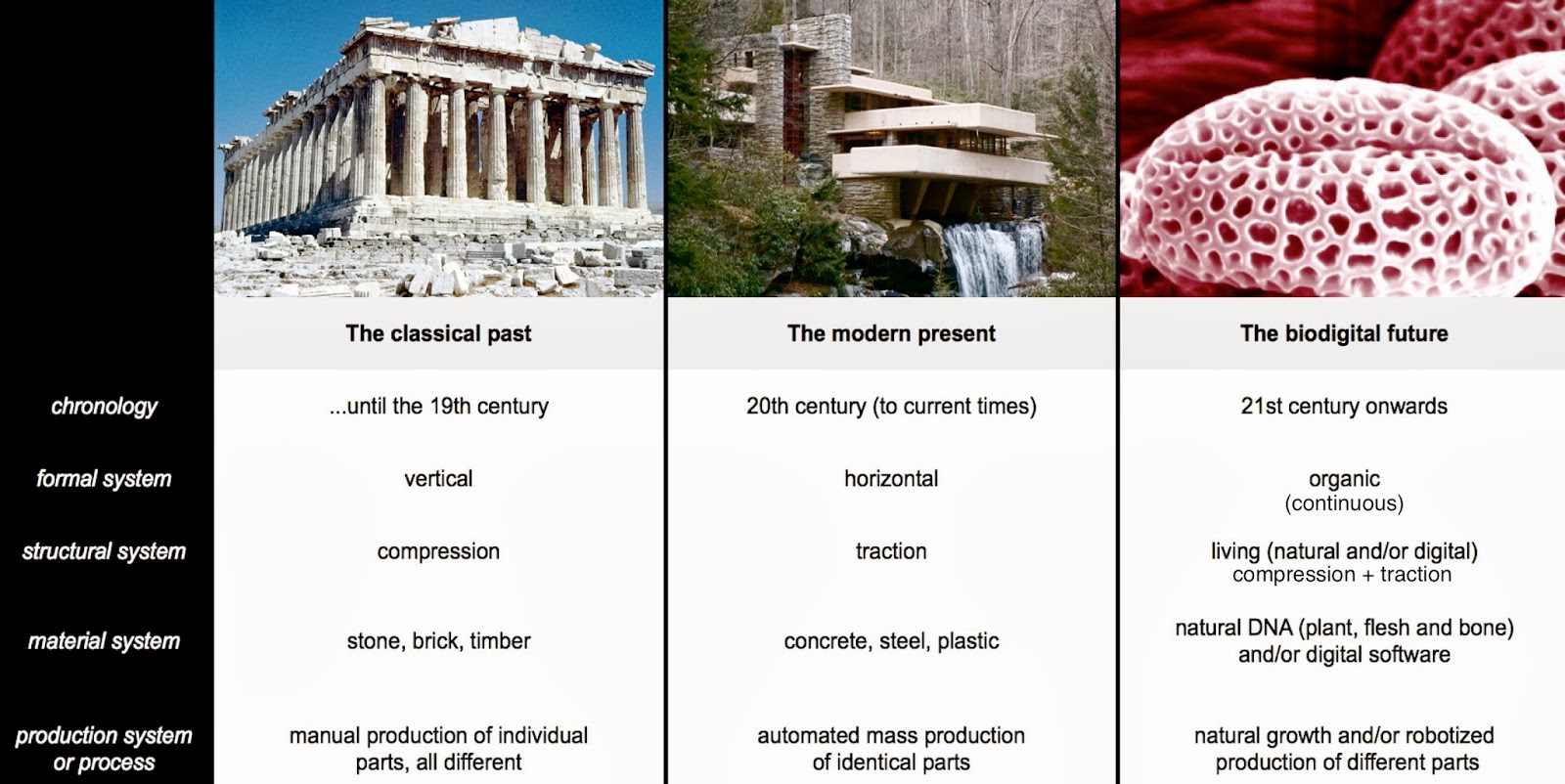 This gives us two approaches to the application of genetics to architecture, with different research objectives:

1. Genetic research to obtain living elements, building materials and useful living spaces for architecture. For example, we are now in the second phase of the genetic creation of bioluminescent plants for urban and domestic use (Estévez, Autumn 2005; Estévez, 2007): illustrated with figure 2, the Genetic Barcelona Project of the Author, and with photos of the UIC Genetic Architectures Laboratory, in Barcelona: the first time in history that geneticists are working for architects. Research is being carried out into the genetic control of growth to develop living cells that are converted into building materials and habitable space that are “directed” by means of their specific genetic design (figure 3), thereby producing architecture that is 100% ecological, recyclable and sustainable, with maximum energy-saving throughout the construction process and no need for manual labour, as its growth is natural.

2. Work on digital design and production seen as a genetic process. Knowing that “which can be drawn can be constructed” (Estévez, 2008), because that which can be drawn using digital tools has a digital DNA which allows automated emergence, robotized self-construction and artificial growth. Using digital technologies to produce not more models or moulds as is habitual in today’s production systems [“No models, no moulds!” (Estévez, 2008)], but real architecture at the natural scale of 1:1, from viewpoints of genetic architectures (figures 4, 5 and 6, of different projects). This is a move beyond the mass production of uniform elements, since digital design and production can equally produce 100 identical or 100 different parts.

Thus the two aspects of research are being carried out simultaneously.

On the one hand, biotechnologies, architectural objectives with the application of genetics, such as the author’s Genetic Barcelona Project [(Estévez, Autumn 2005; Estévez, 2008), figure 2]. Or such as the Genetic Barcelona Pavilion, for a “soft, edible genetic remodelling of the Mies van der Rohe‘s German Pavilion in Barcelona” (figure 3, detail): with the sentence Ceci n’est pas un pavillon became the title of a “manifesto-project” or a “manifesto-image”. The work forms part of research into genetic control of cell growth, making living tissue grow as a building material. It was presented in the exhibition “Bios 4: Biotechnological and Environmental Art”, CAAC Centro Andaluz de Arte Contemporáneo, Seville, 03.05.2007-02.09.2007.

On the other, digital technologies, CAD-CAM to directly produce real architecture. As in the case of the Digital Barcelona Pavilion, Barcelona, by Bernard Cache (figure 4): also known as Pavilion of L’Orme, this was the first building to be completely designed and produced using digital media. It was made in 2001 in the Digital Architecture Laboratory of the ESARQ (UIC), with the collaboration of the School’s lecturers and students. It was also presented in the exhibition “Architectures non standard”, at the Centre Pompidou, Paris, 10.12.2003-01.03.2004). Or as in the case of the G. Doctor’s Surgery, also in Barcelona, by the author (figure 5).

This can be illustrated by other cases of recent work in the research project and postgraduate course in question.

For example, the creation of architecture by researching strategies using digital morphogenetics, or work using genetic algorithms, mainly directed by Karl S. Chu. These, thanks to graphic software and robotics become real architecture surfaces, volumes and spaces: by experimenting with emergent forms using substitutive systems that function on the basis of algorithms, creating patterns of data to which given geometric equivalencies are applied, can translate as “proto-architectural” forms (figure 6).

Alternatively, adopting approaches closer to bionics, the Barcelona Tensegrity Tower was designed, modelled in 3D and created digitally at real scale and to a height of 10 metres (figure 6), directed by Dennis Dollens and produced in the Digital Architecture Laboratory, ESARQ (UIC), Barcelona, 2008. This project brings together tensegrity with biology, thanks to the cellular nature of the tower’s design, its irregular struts, all differing according to the branching, enveloping logic of phyllotaxis. Further, the morphological exploration of skins and membranes illustrates at which point tensegrity becomes organic and where variation can be bio-mimetically incorporated into the digital design. The project drew on a range of references, from Ernst Haeckel’s historical drawings of radiolaria to Buckminster Fuller’s structures.

Finally, with the example of works presented here (figures 4, 5 and 6), the manifesto “No models, no moulds!” by the author of this article sets out to move beyond the limited use —weighed down by our immediate past— accorded to digital technology and exploit the giant’s step it represents over present-day production systems (see above the Diagram of the Three Ages of Architecture, figure 1). Its coherent utilization and its vast potential make it a challenge for the future, with the realization that the principal of these digital technological possibilities is to manufacture real parts, at a scale of 1:1, architecture in themselves, that require “no models, no moulds”.